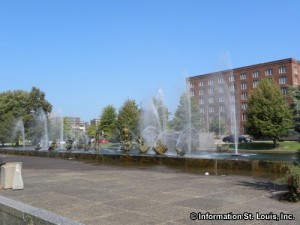 Aloe Park is located on Market, right across the street from Union Station and features the St Louis Landmark, the fountain statue called "The Meeting of the Waters." The fountain depicts the union of the Missouri River, represented by the female sculpture, and the Mississippi River, represented by the male sculpture. The other sculptures in the fountain represent the many smaller tributaries that empty into both. The Swedish sculptor, Carl Milles created the work of art, at the request of Mrs. Edith Aloe, the widow of Louis P. Aloe, who the park is named after. The fountain was unveiled in 1940 with much controversy surrounding the nudity of the figures.

Do you have a photo for Aloe Plaza? Send it to us! Submit Your Photo