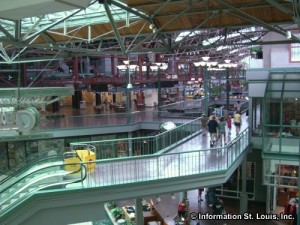 
St. Louis Union Station is located on Market Street, between 18th and 20th Streets, in downtown St. Louis city. This 110 years old National Historic Landmark was once the largest and busiest passenger rail terminal in the world, first opening in 1894. In 1978 it closed as a train terminal, but reopened in 1985, beautifully restored and redeveloped into a mixed-use project including shopping, dining, entertainment and a hotel. Today many unique retail stores and restaurants are located at Union Station, as well as a 517 room Marriott Hotel and a plaza for special entertainment. The only trains pulling in today are the MetroLink light rail mass transit system. Both the Red and Blue Lines make stops at the Station numerous times a day. Paddle boats can be rented for a fun paddle around the lake for a truly unique entertainment experience and free historic guided tours of the station are also offered. Store Hours: Mon-Sat: 10am-6pm, Sun: 10am-6pm, NOTE: Restaurant and entertainment venues may open early and close late.

Do you have a photo for St. Louis Union Station? Send it to us! Submit Your Photo